William Smithson, yeoman of Weardley and sometimes York in Yorkshire, England, appears to have had two brothers: John and Marmaduke Smithson. His brothers, also yeomen, had substantial property holdings around Weardley, near Leeds and at York. The most likely person to be their father was Thomas Smithson, yeoman of Weardley, first recorded in a document of 1529. Thomas and William are the earliest known ancestors of the Smithson family from Weardley. 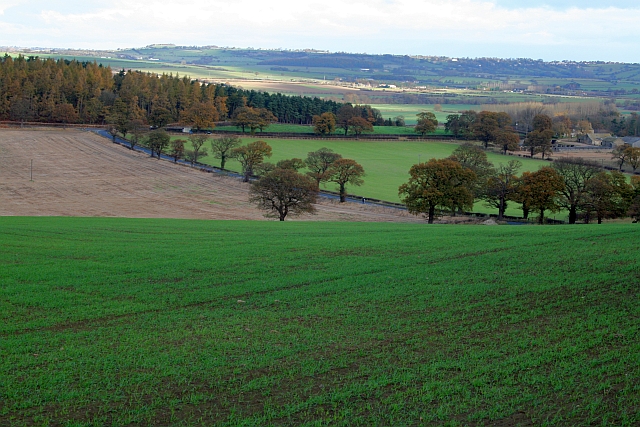 View across the River Wharfe valley. On the left is Rawden Hill, on the middle right is the Smithson village of Weardley and in the distance is the village of Dunkeswick. (Copyright Steve Partridge and licensed for reuse under this Creative Commons Licence)

Smithson ancestry is far clearer after 1600 with many of William’s descendants recorded in the registers of the parish of Harewood. Nevertheless, there are gaps in the records. Wills have played a part in scaling these brickwalls. One will went some way in establishing the relationship between the Weardley Smithsons and the family of Richard Smithson of Alwoodley Hall (d.1704/5), which endured in that locality until 1802. Another will identified William Smithson of Bardsey-cum-Rigton as the brother of Peter Smithson of Weardley (d.1728/9). William’s will, in turn, revealed a ‘missing son’, Richard Smithson, who re-established the Smithsons at Weardley after the death of his uncle Peter. Richard’s brother, Peter, took up land nearby at Arthington Bank in the parish of Adel, leaving the family’s younger brother, James, to farm at East Rigton.

The Smithson family spread across Yorkshire from the mid18th century: from Arthington Bank to Bramley; from East Rigton to York, Leeds and Bradford; from Weardley to Otley and (with the Bramley Smithsons) across the Aire Valley. By the mid19th century, the Smithsons from Weardley had largely abandoned farming, taking up labouring, establishing businesses, working in trades, operating as carters and manning the machines in mills across the region, to mention only the most popular occupations.

Most of the descendants of William and Thomas Smithson of Weardley led unassuming lives. A few achieved things in life that merited public acclaim; others achieved a degree of notoriety; some risked or gave their lives in the service of their countries. All played their part, no matter how small, in creating the world as we know it.

THIS WORK MAY NOT BE COPIED, DOWNLOADED, REPRODUCED, DISTRIBUTED, OR PUBLISHED IN ANY FORM, INCLUDING ON THE INTERNET.

NOR MAY IT BE OTHERWISE TRANSMITTED IN ANY FORM WITHOUT THE PRIOR WRITTEN PERMISSION OF M. A. SMITHSON.

PERMISSION IS GRANTED TO DOWNLOAD AND PRINT INFORMATION FOUND ON THE SMITHSONS FROM WEARDLEY WEB SITE FOR PERSONAL, NON-COMMERCIAL USE.

Every effort has been made to trace the copyright holders and obtain permission to reproduce images. Please do get in touch with any enquiries or any information relating to images or the rights holder.